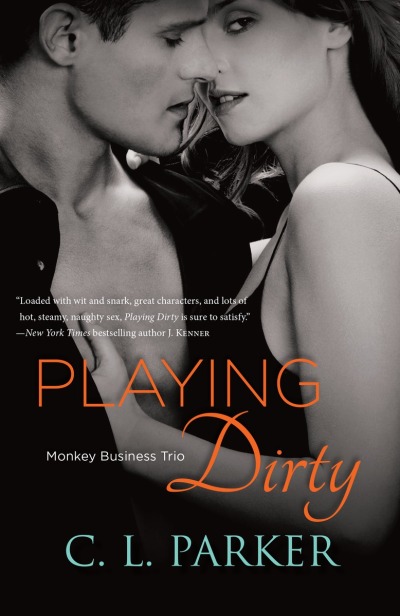 Cassidy Whalen is as determined as they come. An Irish girl from a small fishing village, she worked hard to pursue her love of American sports and land her dream job as a sports agent with a major agency in LA. Unlike her colleague, Shaw Matthews, who believes you should work smarter, not harder. Although it’s assumed Shaw comes from money, he doesn’t. What he did inherit was a genetic gift of charisma, and he used it to his advantage, establishing connections at an early age that helped him climb the corporate ladder. He’s arrogant and used to getting his way with women, but he’s met his match with Cassidy, who’s out to prove that anything he can do, she can do better.

When a partnership position with Striker Sports Entertainment is up for grabs, Cassidy and Shaw are in a head-to-head competition to snag the most sought-after athlete in the country. Let the games begin! Playing their sexual strengths against the other’s weaknesses leads to an affair that takes the competition . . . to their offices, the co-ed bathroom, the boardroom, the supply closet, the elevator, and anywhere else they’re given the opportunity. But before long, they’re left wanting much more than to one-up each other in just the boardroom; they want to out-do each other in love, too.

Ally was hot on my heels the second I stomped into my office, catching the door I attempted to slam shut and closing it softly behind herself instead. Even when I didn’t have the presence of mind to keep my cool, she did. My assistant had become an expert at detecting my moods, though it wouldn’t take the dynamic duo of Holmes and Watson to solve the mystery today. It was always the same after I’d been anywhere within the vicinity of Shaw Matthews. I did my best not to let it show, since I had a reputation to uphold, but it took a lot of work. And grinding of teeth. I’d even bitten into my tongue a time or two.
I growled in frustration, feeling the familiar Irish temper surge through my veins to warm my skin. No doubt, my face was red. “That arrogant—”

“—son of a bitch,” Ally finished, which, I admit, coaxed another growl from me. I didn’t know if I was irked more by her insubordination or by my predictability. “You hate him. . . . He’s just so . . . Arrrgh!”

Arrrgh? Am I a pirate now?

I spun around to face her, the messenger bag on my shoulder continuing with the momentum and nearly taking me with it. “No one likes a smart-ass, Coop.”

My assistant’s name was Ally Cooper, to be exact. Even though the surname hadn’t been her parents’, they’d been Alice Cooper roadies and fanatics, and thought giving the name to their daughter, legally, would be an appropriate homage. Ally suspected that her mother had been more than just a groupie—something her mother had never confirmed or denied. I was with Ally. She had the Father of Shock Rock’s lean physique and raven hair, and she was even rocking the nose, though Ally wore it better. If his tour dates matched up with the timing of her birth, no way would it have been a coincidence.

I didn’t think she was sincere. Mostly because I knew she wasn’t. Like I said, she was insubordinate. I’d fire her if she weren’t so good at keeping up with me. Apparently, there was something in the water. That or everyone was in on some scheme to drive me bat-shit crazy. Including Wade Price. Naturally, it made me growly.

C. L. Parker is a romance author who writes stories that sizzle. She’s a small-town girl with big-city dreams and enough tenacity to see them come to fruition. Having been the outgoing sort all her life—which translates to “she just wouldn’t shut the hell up”—it’s no wonder Parker eventually turned to writing as a way to let her voice, and those of the people living inside her head, be heard. She loves hard, laughs until it hurts, and lives like there’s no tomorrow. In her world, everything truly does happen for a reason.