Temptation is ONLY a room away….

Echo Kelly is loyal to her studies, family, and aerial artistry. She has no time for or interest in anything else, and is heartbroken when her oldest brother, Sebastian, gets accepted to a study-abroad program— exchanging places with cocky, not-at-all-shy foreign exchange student Kingston Hawthorne.

Kingston Hawthorne had the life every twenty-year-old guy dreams of— endless cash, easy women, and fast cars— until his father ripped it all away, shipping him off to the States and placing him temptingly close to the underage virgin who fascinates him in the most challenging of ways.

With Kingston’s bedroom just a connecting bathroom away from Echo’s, the chemistry between them is even more enticing than the notes he leaves for her on the shower door.

How long can you pretend you’re just friends? 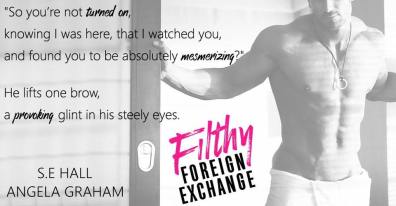 I creep silently into the house and find a tinfoil-covered plate on the kitchen counter: the dinner my mom saved for me, even though I’m sure my father said something along the lines of, “If she wants to eat, she can sit down, on time, with the rest of us.”

I smile to myself at the small victory. My dad may think he rules the roost, but he doesn’t call the last shot when it comes to my mom taking care of her babies.

After I finish off the still-warm chicken and potatoes as quietly as possible, I tiptoe past my parents’ bedroom, paying special attention to each step I take—or, more specifically, avoiding the floorboards that creak.

Damn, he’s good. I literally wobbled left to right like a drunk person, nailing the silent boards, and he still heard me.

“Yes, sir,” I spit out before hurrying up the staircase to my bedroom.

My grandfather, smart man that he was, built this house after he had children. With the master suite on the bottom floor and the kids’ rooms upstairs, there was no getting past the parents. But somehow, Grandpa had forgotten to take into account that our family has studied the art of Aerialism for generations. So once you’re up in your room, getting out of it undetected isn’t much of a problem—a caveat I know for a fact my older brother Sebastian took advantage of often. Mostly because he used my balcony to do so nine times out of ten.

I head straight for a hot shower, not allowing my overworked muscles to stiffen. The entire time I stand under the spray, I stare through the glass at the closed door on the far side of the room. Sebastian’s bedroom is connected to mine by a Jack and Jill bathroom, but my brother isn’t on the other side anymore. Tonight, and every night for this school year, he’ll be in England, his room vacant. The thought is the final blow to my day.

Once I’ve dried off and tied my robe, I open his door slowly, with tears in my eyes. I’m not sure why—maybe to see the proof of his absence, naively hoping that will help settle my anxiety?

It’s dark inside, of course, but the thin drapes are parted and the moon is full and bright after tonight’s storm.

My breath hitches, my feet coming to a complete and sudden halt when I spot the large body lying in my brother’s bed. It’s almost comforting at first; I find myself wishing it was Sebastian, but I know it’s not. And I can only assume it’s Kingston. I have no clue why my parents didn’t just drop him at his dorm, or why I’m not turning around to go back to my own room. But now, as I stand so close, my curiosity is piqued.

From this angle and lighting, he could almost pass for Sebastian: dark-brown hair cut short, muscularly outlined back, sleeping on his side. But whereas Sebastian sleeps under the covers, our houseguest has the sheet and comforter shoved down past a tight, perfectly rounded ass that’s filling out his black boxer briefs in a way I find startlingly sinful. He also has his arms shoved under his pillow—another difference that makes it hard for me to pretend.

I creep a bit farther into the room, checking out his luggage—designer and monogrammed, all matching of course, and reeking of luxury and fine leather. Fancy, but mismatching horribly with the black (somewhat sexy) combat boots that—

“Umpf,” I grunt despite my desperate efforts to remain quiet, reaching out for anything to brace myself on. But it’s no use. I fly forward, having tripped over the second, not-nearly-as-sexy-now boot.

“I was told you were the graceful one.”

His low, gravely taunt comes out of nowhere and startles me further, throwing me backward in the opposite direction, my balance completely lost. With my hands flailing, my only hope now is that the luggage provides a soft landing.

But I never meet it, or the floor. Instead, two strong hands rescue me, snaring my wrists and pulling me down on top of one seriously hard, hot—temperature-wise, I mean—body.

“I’d presume you to be Echo and say hello, but again, not the graceful girl I was expecting. So, you are…?” He looks up at me with a smug twitch to his lip and devastating twinkle in his gray—Are they really gray, or is that the lighting?—eyes.

“I…uh…” I stammer idiotically, dressed only in a robe that’s far too revealing for the position I find myself lying in: across the bare torso of perhaps the most gorgeous guy I’ve ever seen up close, in person. And we are very up close.

I attempt to push off him, but his hands slide down to my hips and grip tighter.

“Yes,” I gasp, before battling for a sense of authority in my next response. “I’m Echo. Sorry I woke you, I just wasn’t…expecting you to be in here.” His brows rise, practically screaming that he sees right through me. “Let me up! I tripped over your big, stupid boots, then you scared me.”

“My apologies, Echo.” A quiver plays down my spine at the way my name rolls off his lips in that decadent English accent of his. “Had I known you’d be visiting my room tonight, I’d have taken more care in setting my belongings out of your way.”

“I should’ve left when I realized you were in here, so we’re even. Can you let me up now?”

His grip remains firm as his smile deepens. “I must admit, I am rather enjoying this version of our introduction. Far better than a mere ‘How do you do?’ over dinner.” He’s sporting a full grin now, blindingly bright even in the dimly lit room.

All I can do is stare at him, words failing me. I half suspect I’m dreaming, but I can feel, long and stiff against my stomach, that this humiliation is, in fact, reality.

“I’m quite comfortable, so do feel free to stay as long as you like. And if you really want to give me a smashing welcome, don’t be afraid to wiggle around a bit.” His smirk grows impossibly wide as he thrusts his hips upward, pressing his erection firmer against me.

“Are you insane?” I use both hands to shove hard against his chest, but I’m no match for his relentless clutch on my hips. “Let me go! You’re a guest in our home tonight—you can’t just manhandle me when the mood strikes!”

“Ah, grace period.” He nods. “Understood. So, tomorrow night, then?”

“Unbelievable!” I seethe, wriggling around in hopes of escape.

His fingers dig deeper, but the ravenous gleam in his eyes softens. “A joke, Echo. My apologies. Perhaps I took it too far.”

My anger soothes to a low simmer. He’s got a certain playful charm about him, and maybe this is just his very forward way of easing the awkwardness that I instigated in the first place by sneaking into the room in the middle of the night.

But just as I start to form a forgiving smile, he ruins all the excuses I’d just mentally compiled.

“Then let’s hear it.” I wait for him to say God only knows what—a heartfelt apology maybe?—but instead, his expression sharpens into one of pure lust.

“I’ve lied to you. The truth is…I’d much prefer it if you grinded down on me a bit, Love. Wiggling is for strangers, and we’re not strangers anymore, now are we?”

“Ugh,” I growl, propelling myself off him when his laughter loosens his hold. I stomp out of the room, his sounds of amusement lingering behind me.

And that’s how I met our foreign exchange student, Kingston Hawthorne.

S.E.Hall, lover of all things anticipation and romance, is the author of The Evolve Series: Emerge, Embrace, Entangled, Entice, Endure and companion novellas Baby Mama Drama and Guide for Tools Looking to Date My Daughter by character Sawyer Beckett. S.E. also wrote the stand-alone Finally Found novels Pretty Instinct and Pretty Remedy. Her co-written works include The Provocative Professions Collection: Stirred Up, Packaged and Handled 1&2, One Naughty Night and full-length, standalone novel Matched with Angela Graham as well as Conspire, a romantic suspense, written with Erin Noelle.

S.E. resides in Arkansas with her husband of 18 years and 3 daughters of the home. When not writing or reading, she can be found “enthusiastically cheering” on one of her girls’ softball games.

Angela Graham is a New York Times & USA Today bestselling author of the Harmony Series. She spent a lot of her childhood hidden away in the aisles at her local public library where she fell in love with reading. It was a home away from home through her youth to her adulthood.

In 2012 she knew she found her calling in the world of fiction the moment she began pounding away at the keys for her first short story. With a baby on her shoulder, she wrote about a year before deciding to try her hand at a novel. It was the best decision she ever made and one that changed her life in ways she never imagined.

Together with S.E. Hall, she has released five novels and one short story together.

Angela resides in Northwest Arkansas with her three beautiful children and a rowdy dog.