You don’t want to miss the conclusion to Katie and Will’s story.

The truth hurts, they say—and my pain cuts deep. While I was falling for Ethan, he was deceiving me the entire time. He held a huge secret, protected by his lies. When I discovered what he was hiding, the truth shook my world, threatening to ruin us forever. Ruin me. But I soon realized that what we share can’t be destroyed.

The connection between us is too strong. It always has been. I can’t deny him any longer. And I can’t deny my truth: I’m in love with Ethan.

I don’t want to let him go.

While we’re trying our best to make this relationship work, other forces are fighting against us. My family, who wants to keep me safe. The media obsessed with my tragic past. The public that feeds off of it. Even Ethan’s father—the man who nearly destroyed me all those years ago. He’s doing his best to finish the job.

Despite my love for Ethan, the doubts creep in, clouding my mind. Is he worth the pain? Will our love survive, or will we have no choice but to end it—end us—once and for all? 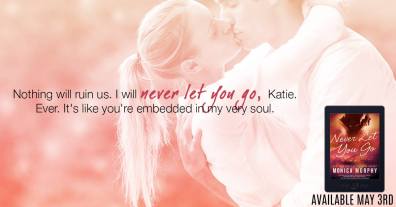 “Maybe I care,” she retorts. “Think about what this will do to us.”

“What could it do? Force us to admit that yes, we’re in a relationship now? What’s wrong with that?”

“This so-called relationship only happened because you sought me out and then lied to me!” Her voice is shrill, her eyes wild, and she visibly shakes. She’s angry.

“I never meant—” I clamp my lips shut when I see her hostile expression. She looks ready to pounce. Christ, maybe she’s right. Maybe we shouldn’t have met today. Our hurt feelings are still too close to the surface, too raw and painful.

“Do you really think meeting me today was a mistake?” I need to know her answer, though I might not like it.

Katie watches me, pressing her lips together. I wait for her response, air lodged in my throat, my heart tripping over itself in my chest. I feel like it’s all come down to this. “This won’t work,” she whispers.

“Us. The two of us . . . together. We need to accept it.” Her face almost crumples but she somehow keeps it together, all while she slaughters my heart with her words. “We shouldn’t be seen together in public. If anyone recognizes us, it will become this—thing, and soon the media will be talking. About us and our sick relationship. And I don’t want that. I don’t think you do either.”

My spine stiffens involuntarily and I slowly back away from her, holding my hands up in front of me in pure defensive mode. As if my position can ward o the blow only her words can deliver.

I thought my father knew how to pack a punch, saying just the right thing to make me internally bleed. A few choice words from Katie Watts and I feel like I’m near death.

“You want me gone? I’m gone,” I tell her, but I don’t budge. I’m hoping she’ll stop me. Despite the pain she’s causing, I don’t want to walk away from her. Even though it feels like my heart is about to crack into a million tiny pieces. I swear she already broke my heart when she first found out who I really was and ran, exiting my life like she was never in it.

Now she doesn’t want to be seen with me in public. Doesn’t want Lisa to know. The rational side of my brain understands why she might feel that way. But the irrational side, the emotional side, is screaming in agony over her rejection, demanding that I hurt her back.

My vengeful side makes me think of my father.

I rub a hand across my chest to ease the radiating ache, but it doesn’t help. The way Katie watches me isn’t helping either.

“It’s for the best,” she whispers. “The minute she spots us, she’ll tell . . . everyone. And then we’re in trouble. They’ll twist our relationship into this weird, sick thing, and I can’t. I can’t bear it, Ethan. I’ve already suffered through too much and so have you. This—we’re not worth it.”

My mouth drops open. We’re not worth it? She’s the only person in my life who’s worth anything.

“I’m—I’m sorry.” The choked words leave her and I can’t say anything in return.

She turns and leaves, her steps hurried, her at black shoes slapping against the pavement as she scurries away. I watch her go, don’t stop her, don’t say her name. I don’t do a damn thing, as if I’m paralyzed, and I wonder for one crazy moment if I might be.

But I’m not. I’m just struck numb by her words, by her worry. She’s right. I know she’s right. The media will turn our relationship into a train wreck, and with good reason.

We are a train wreck. We shouldn’t have happened, but we did. No one else knows what it’s like to be me. No one under-stands what we went through together except her and me. But she has walked away from me yet again. Practically ran, and I did nothing about it.

Breathing deep, I tell myself to stay strong. Either this will work or it won’t—but I want it to. I’m desperate to keep that connection between us.

Yet I need to understand and respect her feelings. Forgive her for walking away from me so easily. It’s damn hard. That tiny, vulnerable part buried deep within me, that little boy who never felt wanted, the one who spent his entire life moving through it essentially alone . . . 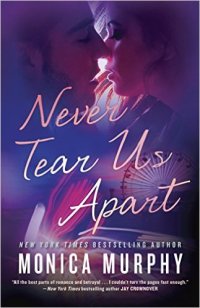 Never Tear Us Apart Book One

New York Times, USA Today and international bestselling author Monica Murphy is a native Californian who lives in the foothills below Yosemite with her husband and three children. She’s a workaholic who loves her job. When she’s not busy writing, she also loves to read and travel with her family. She writes new adult and contemporary romance and is published with Bantam and Avon. She also writes romance as USA Today bestselling author Karen Erickson.

Representation: All questions regarding subsidiary rights for any of her books and inquiries regarding foreign translation should be directed to her agent Kimberly Whalen.