The three O’Gallagher siblings, all in one set.
Includes bonus material such as slightly expanded stories & a Christmas novella not otherwise available!

O’Gallaghers has been a long-lasting establishment in San Diego, known for its Irish brews and fare. When the next generation of O’Gallaghers take over though, it becomes known for a little bit more…

THE BOOKS INCLUDED IN THE O’GALLAGHER NIGHTS: THE SERIES BOXED SET! 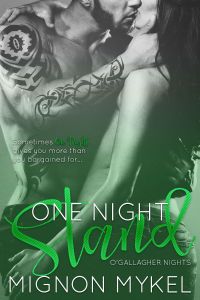 Thirty-two, six-foot, and all muscle. Flashes of dimples behind his black beard, quick winks for the lady patrons, and a tattoo sleeve that leaves the ladies begging to be his nightly conquest.

Because one of them will be.

Every night at close, Conor brings one, two, sometimes more, up to his apartment and has his merry way with them. The women always leave satisfied, and always know he’s a one and done kind of guy, no repeat performances.

But what happens when one of his one night stands comes back into his life five months later, and pregnant no less?

What happens when one night gives you more than you bargained for?

Conor’s about to find out…

Thirty, five-ten, and long, lean muscle.
The middle O’Gallagher is as known for his prowess in the bedroom as the oldest is, and for so much more.

But then there was Emily Winters.

With her white blonde hair, icy blue eyes, and cold demeanor toward him, Rory shouldn’t want anything to do with her.

But so help him, he does. 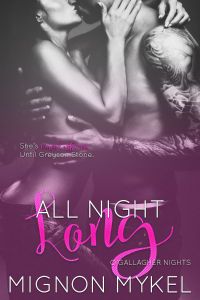 The baby sister of those sexy O’Gallagher boys has her own story to tell.

Her brothers think she’s something she’s not… but the truth is,
most of the rumors had always been true.

At twenty, she decided she needed a change.

Then her brothers hired him.

He makes her feel like she’s spiraling backward, but is she really?
Has she found the one person she can confide in, the one person who will not judge her?
And just how long can she keep it from her brothers before the repercussions settle in and she not only loses him, but the respect of her brothers?

Her road hasn’t been easy–and it’s not about to start smoothing out now.