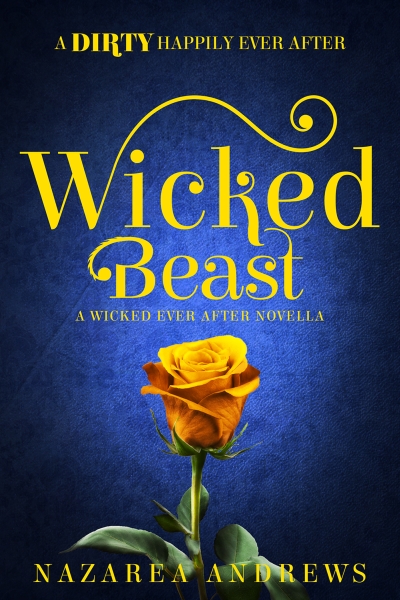 WICKED BEAST by Nazarea Andrews
Wicked Ever After #2

James “Beast” Lutz isn’t like his friends.
He doesn’t crave control the way Charm and Mal do, and he doesn’t play the games Wolf thrives on.
He lives on his knees, all of his strength bent to the will of his Domme.
He’s never regretted that, until now.
Now, when he’s trapped in an arrangement serving a Domme who can’t keep a sub.
Now, when he’s not sure how to trust a woman wrapped in mystery and less sure he wants to.
But the more he gets to know the Domme everyone knows as Beauty, the more Beast realizes everything he thought he knew was wrong.

Teaser:
My knees ache, my back stings from the cane. And then she kisses me, and it’s delicate. It’s as soft as she has ever been with me, all gentle pressure and the tentative nip of teeth. It drags a groan from me and I want to reach for her.
And it terrifies me. 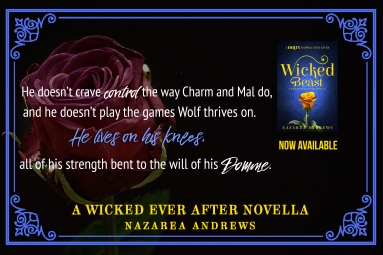 Nazarea Andrews (N to almost everyone) is an avid reader and tends to write the stories she wants to read. Which means she writes everything from zombies and dystopia to contemporary love stories. When not writing, she can most often be found driving her kids to practice and burning dinner while she reads, or binging watching TV shows on Netflix. N loves chocolate, wine, and coffee almost as much as she loves books, but not quite as much as she loves her kids. She lives in south Georgia with her husband, daughters, spoiled cat and overgrown dog. She is the author of World Without End series, Neverland Found, Edge of the Falls, and The University of Branton Series. Stop by her twitter (@NazareaAndrews) and tell her what fantastic book she should read next.