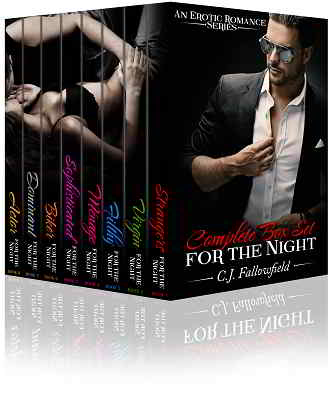 My name is Logan Steele. I’m devilishly handsome, seriously ripped, well hung, charismatic and highly sexed. Women just can’t resist me. So when I lost my job in the construction industry and was struggling for cash, I decided to put my assets to good use.

I don’t advertise my sexual services anymore, I have a long client list that come to me through word of mouth. I’m that good, I’m booked months in advance. Scores of women pay me extortionately high fees to fulfil their fantasies. And for the most part I do. I have a strict set of rules that I abide by, which are provided in the full contract that you’ll receive along with the booking form, if accepted. Just so we’re clear, my absolute number one rule, is full payment up front, which is non-refundable. No exception. There is no requirement for a refund clause, I never fail to perform.

So, now you’re aware of my rules for the night and are about to email me to book your fantasy, all that remains to be asked is, “Who do you want me to be?”

Will Logan continue in his profession, or is there a woman out there for him, one that can fulfil all of his own fantasies?

My name is Logan Steele. I’m devilishly handsome, seriously ripped, well hung, charismatic and highly sexed. Women just can’t resist me. So when I lost my job in the construction industry and was struggling for cash, I decided to put my assets to good use.

Tell me your fantasy, I’ll fulfil it ~ So, who do you want me to be?

Ménage for the Night
Nine months had passed since the filthy night with Yasmin Taylor. Thankfully my clients in between had requested more conservative fantasies, dressing up as a cowboy, sex in an opera box, on top of a brand new Lamborghini in a city car park in daylight. Those sort of jobs I could carry out without reservation. Those jobs I was born to perform for. My next client is Ava Renshaw. Another regular, she’s the bored housewife of a successful international banker, who spends much of his time abroad, leaving her home alone and frustrated. While she loved the sessions we had, she kept telling me that she was craving more and that her fantasy was to be filled by two guys at the same time, but she was too self-conscious to go to a sex club like 710. I contacted one of my friends in the business, Trey Douglas, my go to guy for clients with an MMF fantasy. We’re about to show Ava why two sets of hands, as well as other appendages, are better than one.

The novellas are told in alternating points of view of Logan Steele, and his client, or clients. You can pick up any of them for a complete short burst of heat, however in order to fully enjoy Logan’s development they should be read in the sequence that they are released. Starting from October 2014, I will release one per month.

‘Champagne?’ Logan breathed into my ear.

‘I … O God,’ I cried, as Trey bit the back of my neck. He ran his hands up to my shoulders and slipped his fingers into the material of my dress and started to work it down my arms.

‘I’ll take that as a yes,’ chuckled Logan, as he stepped away from me. I helped Trey by extracting my hands from the sleeves of my dress and shivered as his fingers skimmed over my waist and hips, as he rolled the dress further down until it slithered to the floor, leaving me standing in just my heels and underwear.

‘Ava,’ he groaned, as he flattened his palms and moved them around to clutch my stomach. ‘Do you have any idea how hard you’ve made me?’

I didn’t have a chance to say anything, as Logan stood in front of me, took a mouthful of champagne then stepped forwards, clutched my face and angled it backwards, as he lowered his mouth to mine. Our lips met and mine parted for him automatically and I felt the simultaneous invasion of his tongue and fresh, crisp bubbles that exploded in my mouth. A kiss from Logan was a wonderful thing on its own. If there were eight wonders of the world, then there should be eight sexual experiences in life that every woman had the chance to experience, I’d lay odds that Logan would take the award for most of them, starting with his kisses. I swallowed the champagne, as his tongue sensuously danced around mine with well-practiced ease. How sad was it that I could end the night happy now? From just fingers on skin and a mouth on mine putting me into such a pleasurable state? Trey’s fingers moved to undo the hooks on my bra and slid the straps off my shoulders, before he slithered it away from me and reached around to palm my aching breasts. I whimpered into Logan’s mouth, as Trey gently kneaded with his hands and lay a trail of kisses up the back of my neck, as he tucked in closer behind me. I could feel the outline of his erection against my backside, the rigidness of it was impressive and had me automatically clenching, in anticipation of having him inside me.

When Trey’s fingers started to pinch and pull on my nipples I cried out, the noise muffled by Logan’s skilled tongue in my mouth. He pulled back and sipped some more champagne, as he watched me helplessly writhing. As if they were communicating telepathically, one of Treys hands moved to palm my stomach, as Logan dipped his head and took one of my painfully swollen nipples into his mouth and started to suck. The combined chill of the alcohol and heat of his mouth was toe curlingly good. When Trey’s hand reached down and slid between my legs and gently rubbed the pearls nestled in my swollen folds, I started to tremble. Logan’s lips pulled harder, elongating my tender nipple, as Trey gently pinched the other, while his fingers continued to rub the pearls. I reached up with one hand and clutched the back of Logan’s head to keep him on me, as I pressed Trey’s hand harder between my legs, the friction on my clit was amazing. In seconds I let out a high pitched cry, as a quick short orgasm hit me and leaned back on Trey’s hard body to support myself.

‘You’re still as responsive as ever, Ava,’ Logan smiled as he straightened up.

‘She’s wet, seriously wet. These pearls are coated and I’m going to love sucking them clean,’ Trey groaned in my ear.

Other Books In the series

Strangers for the Night

Virgin for the Night

Filthy for the Night

Ménage for the Night

Sophisticated for the Night

Biker for the Night TBC

Dominant for the Night TBC

Actor for the Night TBC

Available in Amazon Only 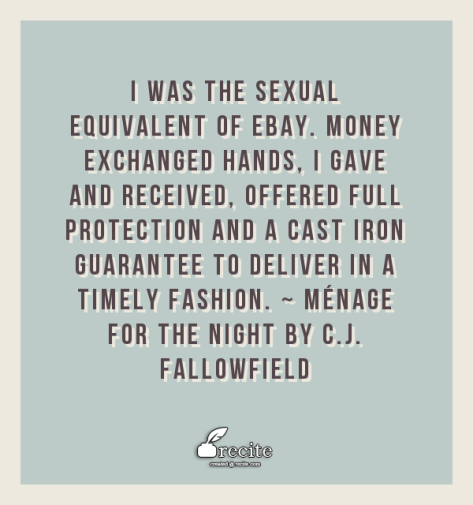