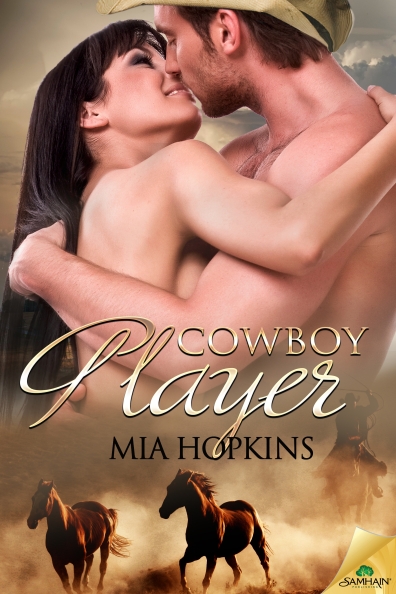 This cowboy and cowgirl sell the steak and the sizzle….

Visit the ranch in COWBOY PLAYER, the third book in the Cowboy Cocktail series by Mia Hopkins…

For eight years, Melody Santos played the game of love and lost—big time. Now she’s back in her tiny hometown looking after her younger sister, making ends meet with an assortment of odd jobs. When her childhood best friend hires her to help him sell his family’s grass-fed beef, the last thing she anticipates is falling in lust with the legendary, brown-eyed player.

To put his family’s cattle ranch back in the black, Clark MacKinnon has his sights set on big contracts—gourmet chefs and restaurateurs. If that means long hours traveling from farmer’s market to farmer’s market, Clark doesn’t mind. Particularly since his new assistant is his childhood crush, all grown up and sexy as hell.

One night in bed leaves them breathless and hungry for more. But when his love-’em-and-leave-’em reputation collides with her trust issues, Clark and Melody must face the truth about what they’ve become: not friends, not lovers, but players in a game that’s impossible to win.

Add COWBOY PLAYER to your TBR pile on Goodreads!

On the record player, the next track started. Guitar licks, drums, a little fiddle—Melody knew the song at once.

He pulled her off the sofa before she could say anything. Wrapped up in the arms of a big cowboy was not a terrible place to be, so Melody danced with him, barefoot in her parents’ living room, the slow two-step a song both their bodies knew the words to. Her laughter died away, giving way to a quiet sense of vulnerability. The verses slid by like a dream, erasing the burden of loneliness she’d been carrying for so long. It had been months since she’d been this close to a man. It had been years since she’d felt this close to one.

Clark could read her mind. “So what was his name again?” he asked softly. “Scott?”

“A slow-motion disaster, that’s what happened.” She rested her cheek against the hard, hot wall of Clark’s chest. “He was a musician. Fun. Exciting. He said I meant the world to him. But I suppose the world wasn’t enough.”

It was still hard to say aloud. “He cheated on me. It had been going on for months. When I found out and confronted him about it, he broke down said he was sorry. We tried to put it past us. We even went to therapy. But it was all a lie. He left me when my mom passed away.” At first, the pain had been excruciating, dulled only by grief and the weight of her new responsibilities. “Eight years, down the drain.”

“That’s a long time. Did you ever talk about getting married?”

“He said he didn’t like labels.” She sighed. “Which was also a lie, because he married the other woman in Vegas in February.”

“Jesus Christ. I’m sorry.” Clark gave her a squeeze. “You know, if you were mine, I’d hold on to you for good.”

“Sure. Until the next piece of ass came along.”

“That’s the friend talking. Your dick might say otherwise.”

“My dick, huh?” Clark laughed quietly. “You’re welcome to check with my dick yourself. He doesn’t talk loud, so you’ll have to get down on your knees to hear him.”

“Seriously, Mel. You don’t know what you’ve got going on. Smart as all get-out. Hell, you run circles around me, and I’m a genius. And you’re funny too. Ain’t many women who can make me laugh. You’re one of them.”

She rolled her eyes. “Aw shucks, Ma. Next the cowboy told me I was real purty.”

“So beautiful. I always thought so.” He gave her a sad smile. “Honest to God.”

The heat rising between them cooked her brain. She was at a loss for words. “Thanks.”

“No thanks needed. Just stating the obvious.” They danced until the song ended on a ribbon of steel guitar. Clark leaned down and pressed his lips to her temple.

Instead of pulling away, he traced a slow, agonizing trail of kisses along her hairline until he was kissing her neck just behind her ear.

Pleasure overloaded her nervous system, but her brain wouldn’t let her enjoy it. “Wh-what are you doing?”

“Something I’ve wanted to do for a long, long time.”

Check out the other books in The Cowboy Cocktail series!

Forget chocolate and flowers. This homegrown honey is all the sweetness he craves.

Small-town life is nothing but a waiting room for eighteen-year-old honor student Corazón Gomez. Work and school leave little time for love, but with a full-ride Ivy League scholarship and a one-way ticket out of the boondocks, who needs it?

The answer appears on Valentine’s Day when her old cowboy crush ambles into the ice cream parlor where she works, inviting her to go on a late-night ride in his truck. For the first time she wavers between staying on the straight and narrow, and going off-road with the handsome heartbreaker.

After four years working on ranches all over the country, Caleb MacKinnon is back on the family farm helping out his mom and brothers while his father fights cancer. The one bright spot: smart, funny, and wickedly sexy Cora.

From the start, they both know this blazing-hot love affair can’t last. But when autumn comes and Cora has to leave for the East Coast, Caleb must find a solution to keep himself—and his heart—from falling apart.

Warning: Contains hard, cherry-poppin’ sex in a pickup truck and a cowboy charmer who talks dirty in two languages.

Marketing hotshot Monica Kaur has put her big-city life on hold to help bail out her brother’s failing business. Now she’s got three months to plan and promote a rodeo, the first her tiny hometown has ever seen.

To ensure the rodeo’s success, Monica enlists a local hero, a rancher’s son who’s made a name for himself on the bull-riding circuit. Problem? She can’t stop daydreaming about the cocky bastard—and all the things she longs to do to him out behind the chutes.

Professional bullfighter Dean MacKinnon is home helping his family while his father fights cancer. Haunted by bad memories, jaded by love, Dean finds escape in a no-strings-attached go-round with brainy, sexy Monica, whose close-knit Sikh-American family would sooner run him out of town than see her with a notorious rodeo Romeo.

In private, Monica and Dean play as hard as they work. But as the rodeo draws near, that clean break they promised each other is getting more and more hung up in the rigging.

When she’s not lost in a story, Mia spends her time cooking, gardening, traveling, volunteering and looking for her keys. In a past life, she was a classroom teacher and still has a pretty good “teacher voice” and “teacher stare.”

She lives in the heart of Los Angeles with her roguish husband and two waggish dogs.

You can also visit her online at the following places: